Make Fresh Pasta In 3 Easy Steps
You’re only 2 ingredients away from the best pasta you’ve ever had! Unlike regular dry pasta that’s made from semolina flour and water, this delicious fresh pasta is made with eggs and flour, making pasta dishes even more rich and flavorful. This fresh pasta recipe makes 4 large servings of your favorite long pasta, such as fettuccine, tagliatelle, or pappardelle, and even pasta sheets to include in your favorite lasagna or ravioli dish. Fresh Never Tasted So Good!

Use Fresh Pasta For: 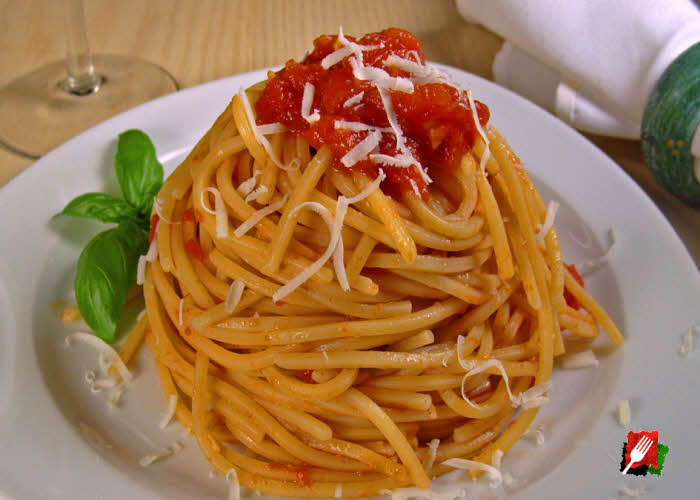 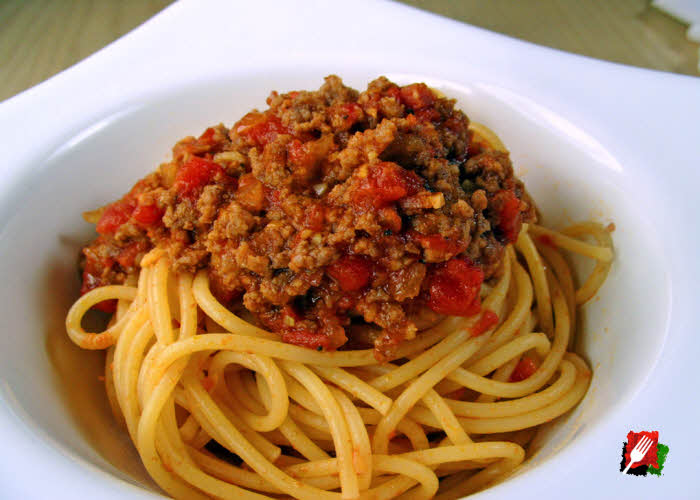 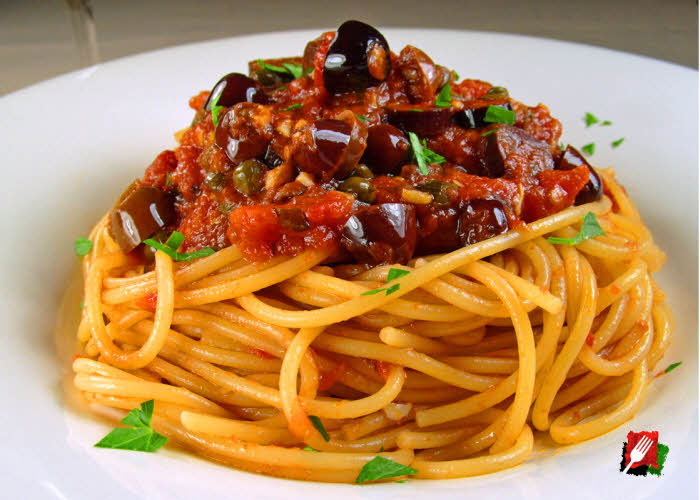 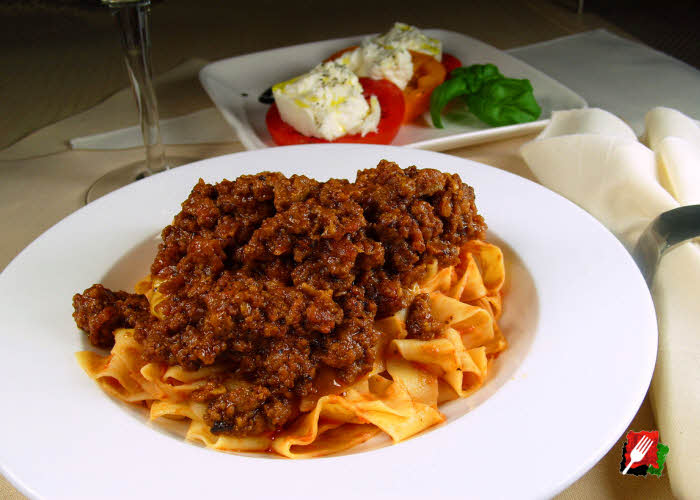 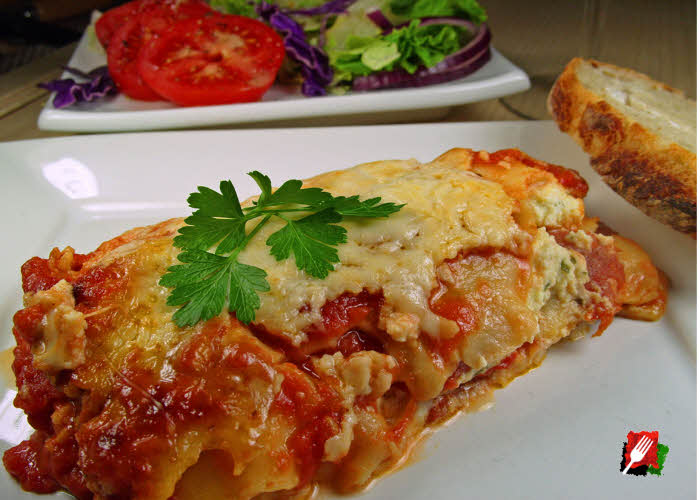 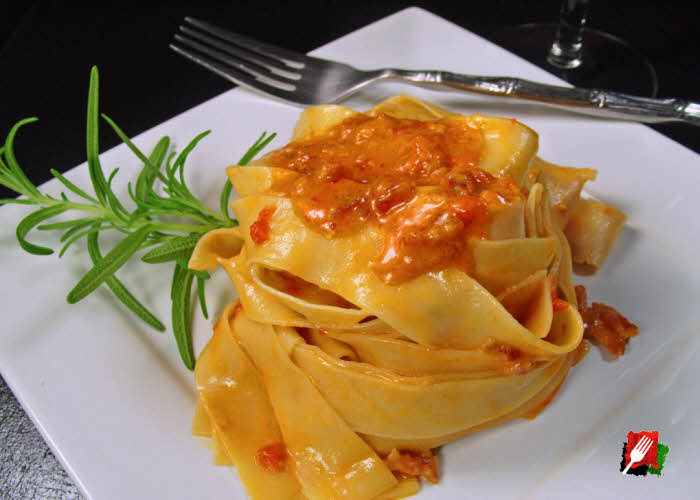 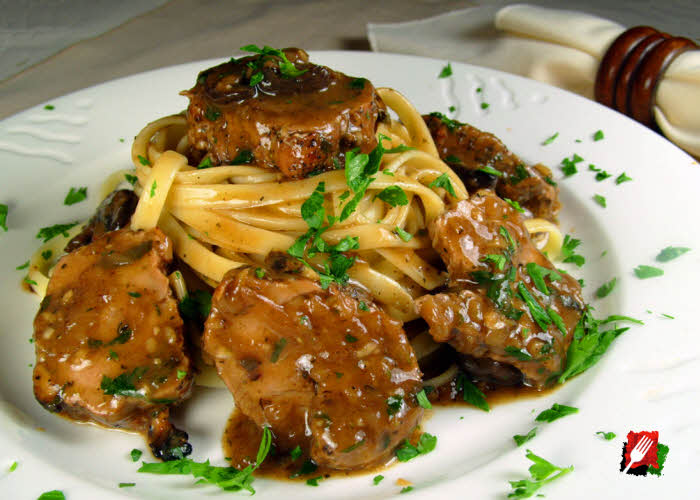 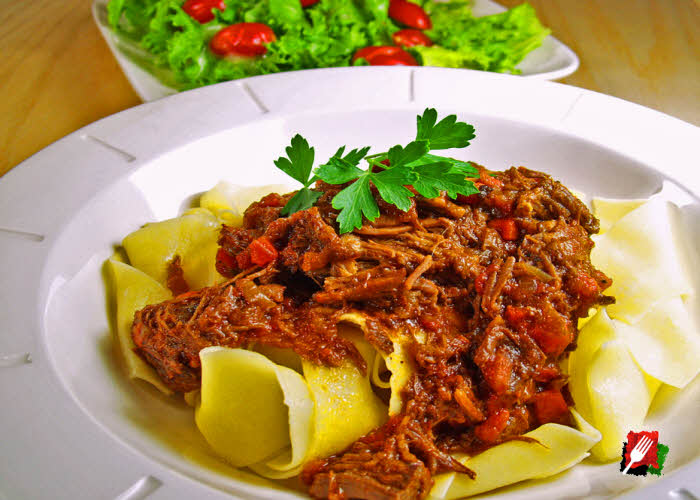 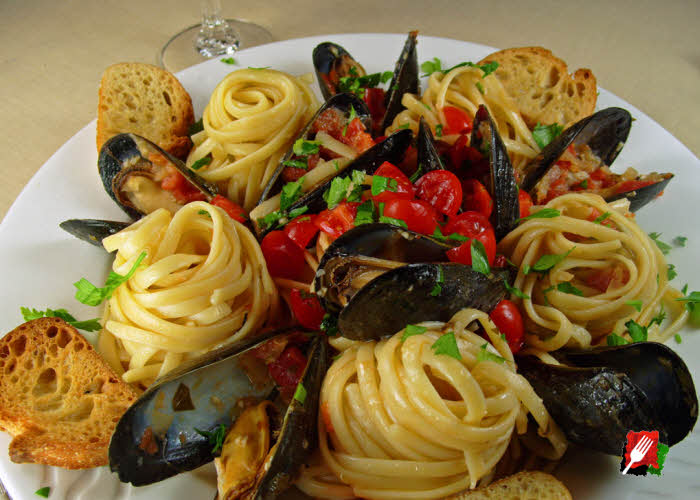 In a large bowl or directly on the counter, make a mound with 2 1/4 cups (about 10 ounces) of all-purpose flour. With a large spoon, form a well in the middle of the flour and add 2 large eggs and 4 large egg yolks.
(click images below to enlarge)

1. Mix the Pasta Ingredients
Start by beating the eggs with a fork, then gradually combine the flour with the eggs by working from the inside walls out until the beaten eggs are well combined with the flour. Then use your hands to continue to work the pasta dough, folding the dough over and over until a single cohesive dough ball is formed. If it seems too dry, spray some water on it (about a tablespoon at a time) until you achieve the desired consistency. If it’s too wet, dust with a little flour. When the dough ball is finished, it should weigh about 1 pound.

With a stainless steel scraper, slice the 16 ounce dough ball in half, then slice each half in half again. Work each of the 4 ounce dough balls by hand until they are all smooth and round. Set them aside on wax paper, then cover with a moist kitchen towel for 20 minutes. This resting period makes it easier to roll out the dough through the pasta maker.

Use or Store Your Fresh Pasta Dough. At this point, you have three options: (1) immediately start running the dough through your pasta maker to make fresh pasta; (2) individually wrap the pasta dough balls in plastic wrap and refrigerate them for a day or two: or (3) freeze the pasta dough for up to 1 month. If you freeze the pasta, defrost them in the refrigerator one day before use, then let it return to room temperature before rolling through your pasta maker.

If you have a food processor, the pasta dough making process is much faster and easier. Using a large (7-cup) food processor, you can make 1 pound of pasta in minutes by first adding 2 1/4 cups (10-oz) of all purpose flour into the food processor and mix for 2 seconds to level the flour. Then add 2 whole eggs and pulse blend for a few seconds, then add the remaining 4 egg yolks and pulse blend for another 30 seconds or until it forms into a crumbly, moist texture that is fully combined. Pour out the dough onto a floured surface, knead it for a minute or two, then form into a smooth ball. 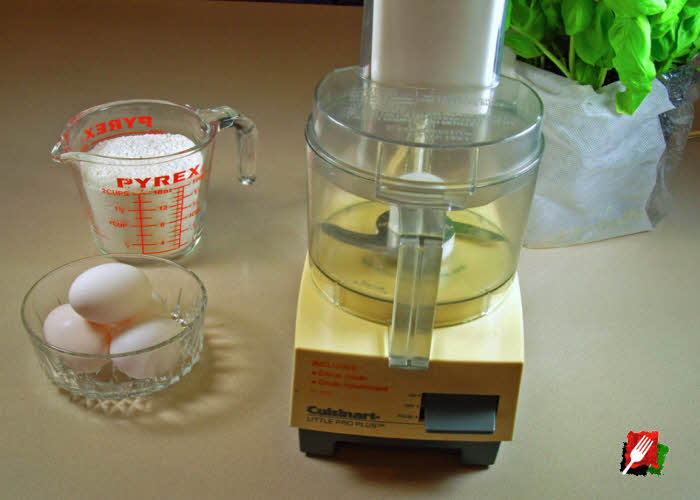 2. Roll Out the Pasta Dough
After the dough balls have had a chance to rest, clamp the pasta maker to the counter or table and grab one of the 4-ounce pasta dough balls from under the moist towel. Flatten the dough ball with your fingertips about 1/4″ thickness until it can be fed through the pasta maker at its setting with the widest opening. Dust the dough on both sides with flour. Many pasta makers have a dial for 6 to 9 thickness settings, with the largest (thickest) opening generally labeled #1. Select #1 as the starting point to make the first pass at rolling out your pasta.

Run it through twice, then dust with a little flour and lay the pasta out sideways and fold one end toward the middle to make the side straight enough to feed through the machine. For most consumer pasta makers with a 6″ roller, square off the other end by folding it as well, to make the total width about 4 1/2 to 5 inches. This will allow for expansion as the pasta continues to be fed through the machine at the various thickness settings. For other pasta machine roller widths, adjust the dough width (folds) accordingly.

With the pasta machine still on its thickest setting, run the pasta through, keeping it aligned in the middle of the roller.

The Pasta Loop
Significantly speed up the process of rolling out the pasta dough by using the Italymax “Pasta Loop.”
Rather than hand feeding the pasta through the pasta machine over and over, it’s much easier (and faster!) to make a pasta loop and run the pasta through continuously. It now takes seconds rather than several minutes to roll out your pasta!

Roll out the pasta dough MUCH faster by using the Italymax “Pasta Loop” method.

To make a pasta loop, trim the ends, and run it through the thickest setting a second time, but stop when the top end is about an inch from the top of the roller. Then take the bottom hanging end and swing it over the top end and start to feed it in the roller, while pressing the two ends together across the full width of the pasta. Slowly crank the roller to join the two ends to make a continuous loop. Move the thickness adjustment to the next thinner position. (If #1 is the thickest roller setting, then move your dial to #2).

Loosely hold the pasta out with the fingers of your left hand, while you crank with your right hand. After the second pass, move the roller setting to the next thinner (narrower) position. Run it through twice with the #3 setting. Then run it through two more times using the #4 setting. It should be getting pretty long now.

If your pasta maker has 6 positions, run it through two final times using the #5 position. At the end of the two passes, the pasta sheet will be very long and translucent to the point of seeing your hand through the pasta. When you have achieved the desired thickness for your pasta (usually the next to the last setting on your pasta machine), cut the pasta and roll it through.

Lay the pasta sheet out on your work surface and dust both sides with flour. Note: On the next to the last setting, each 4 ounce pasta dough ball should roll out to make a sheet about 5 1/2″ wide by 42″ (3 1/2 feet) long – enough for one very large serving.

3. Cut the Pasta
To make spaghetti or 1/4″ fettuccini pasta noodles, most pasta machines have attachments that can easily make it. But to make wider pasta, it needs to be cut by hand. This can be accomplished by simply taking one end of the floured sheet and fanning it back and forth folding it like an accordion on a cutting board, then lining up the sides to prepare to cut.

Then cut the pasta to the desired width with a large sharp knife. In this case we’re making tagliatelle pasta, so we’re making 3/8″ wide cuts. Tagliatelle is the official pasta called for by the city of Bologna, Italy for their authentic bolognese recipe.

Although most pasta machines have cutting blades to quickly make spaghetti and fettuccine by simply rolling the sheets through an attachment on the back of the pasta maker, there are myriad shapes and sizes that need to be done manually. Below are the approximate widths for manually cutting various pasta types:
• Angel hair 1mm diameter (0.04″)
• Spaghetti 2mm diameter (0.08″)
• Linguine (flat) but like spaghetti – 1/8″ wide
• Fettuccine is 6.5mm to 8mm wide (a little over 1/4″)
• Tagliatelle (pronounced talia-telly) are 10mm wide (about 3/8″)
• Pappardelle pasta is 3/4″ wide (often varies from 5/8″ to 1″)
• Pasta sheets are 3 1/2″ to 5″ wide (but can vary based on requirement) for lasagna and ravioli

Fresh homemade pasta is a richer, but more delicate pasta than the typical dry pasta found at the grocery store. As such, smaller fresh pasta like angel hair and spaghetti doesn’t hold up as well as larger fresh pasta such as fettuccine, tagliatelle, and pappardelle. Consider using dry pasta or cooking smaller fresh pasta al dente for the best results.

With the pasta cut, it’s now ready to be separated. To separate the pasta, lay the long pasta out side by side on a cutting board, then cut into 10″ to 12″ lengths. (Eating a plate of 3 1/2 foot long pasta noodles can be difficult to manage!). The end result is 4 ounces of delicious 3/8″ wide fresh tagliatelle. Ready to wrap and refrigerate or freeze – or drop in a pot of boiling water for immediate enjoyment. 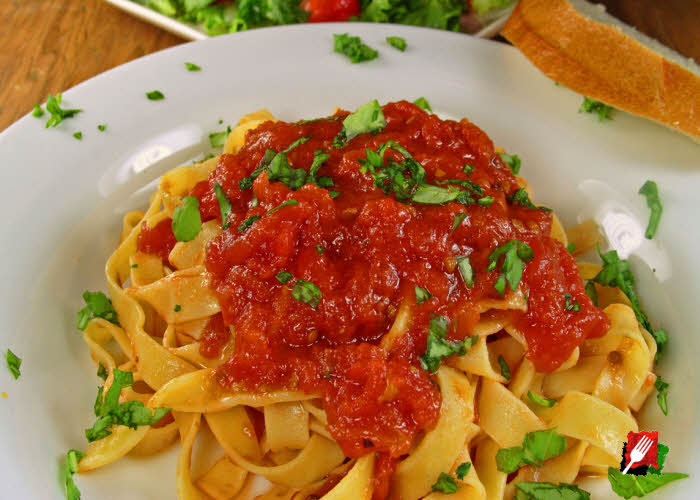 This fresh pasta recipe makes 4 large servings of your favorite long pasta, such as fettuccine, tagliatelle, or pappardelle, and even pasta sheets for making your favorite lasagna or ravioli dish.

• The typical serving size for fresh pasta is 2 to 4 ounces per serving, or at least 4 servings per pound of pasta dough. Since the pasta nearly doubles during the cooking process, a 4 ounce serving of fresh pasta becomes about 8 ounces of cooked pasta – a very generous portion and that doesn’t even count the sauce and any sides.

• Salt the pasta water – not the pasta.
Rather than adding salt to the flour and eggs recipe, it’s better to add the salt during the cooking process. Stir in about 2 tablespoons of salt per 4 quarts of water just as the water begins to boil. Adjust up or down depending on the sauce. For example, a salty sauce like puttanesca would require less salt in the pasta water.

• As the water begins to boil and the salt is stirred in, wait a minute or two for the water to aggressively boil before adding the pasta.

• Fresh pasta cooks much faster than dry pasta. Regular dry semolina spaghetti pasta, for example, might take 8 to 10 minutes to cook, while the same fresh pasta will often take less than 2 minutes to cook. Cook the pasta al dente so that it doesn’t overcook if you’re adding it to the sauce pan.

• Do not thaw out frozen pasta. If you have frozen your fresh pasta for later use, do not thaw it out before cooking. Go directly from the freezer to dropping it into the salted boiling water.

• Always retain some of the pasta water. If you’re making a sauce, reserve at least a quarter cup of pasta water to add to the sauce if it’s a little too thick. Pasta water not only thins it out, it also adds another level of deliciousness to the sauce.

• Depending on the pasta and sauce combination, the traditional Italian way is to first add the pasta to the sauce before plating. To accomplish this, use a large slotted spoon to move the wet al dente-cooked pasta directly into the sauce pan for a minute or two to finish cooking and coat the pasta ribbons evenly. The starches from the pasta will add a delicious layer of flavor and slightly thicken the sauce. Plate up the pasta and top with a little extra sauce and freshly grated Parmigiano Reggiano or Pecorino Romano, then serve with artisan bread and a Caesar salad.

Make Your Food Look As Good As It Tastes!
We eat with our eyes first, so it’s important to make sure your food is arranged to look as delicious as it tastes. Here are some food styling tips that will ensure it does (click image for captions).